Ready for Move In

Well not really, but the construction is finished 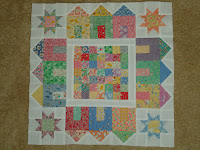 ...and what fun it was...thank you Sherri and Sinta for taking us on Another Year of Schnibbles.  I had a bit of time yesterday and was able to finish the construction...and what a wonderful time it was.  I've learned a big lesson this weekend...I will never again take my sewing time for granted.  I used to sew for hours and hours...and now I get bits of time and oh how I appreciate those bits.

I'll try to get back here later this week...no promises, but I'll try...have a wonderful week!
Posted by Carol at 6:40 PM 41 comments:

The day started out drizzly and windy...very hard to walk 2 dogs that hate to get wet...have you ever heard anything so silly...2 labs that don't want any part of getting wet?  So after following them around the yard with the umbrella, they did what they needed to do and came back in the house.  We went for our regular walk later in the morning.

Called Mom this morning and she was doing great...sounded like her old self...it was wonderful...as we were chatting she said, "The roads are wet, there have already been accidents on the roads you use, I'm feeling really good today, so why don't you just stay home."  I argued with her, but when she said, "Please stay home"  what's a girl to do...I had to listen to my mother.  Andy and I will head over tomorrow morning for a visit.  So after a trip to the grocery store, and a couple of little errands I headed upstairs.  Boy oh Boy...did that ever feel good.  I got to sew for several hours today, and I'm telling you it felt great...I even got started catching up on my DVR'd (I'm not sure that's really a word) shows...2 episodes (one 2 hour one) of Private Practice from October or November.  I started construction on my tiny neighborhood 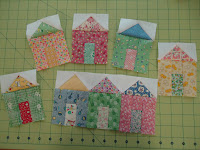 for Full House...I know I won't have it done by the end of the month for the parade of Schnibbles, but that's OK, I had a wonderful day and I love the houses...I'll finish this for sure and it will be hanging in my sewing room. Stay tuned...LOL! 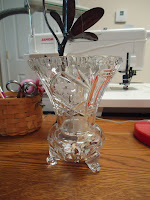 I came across when I was cleaning out Mom's villa back in November...I was so excited when I found this.  My Dad used to cut roses from the bushes in our yard, he'd bring them in and give them to Mom...she'd put them in this glass vase that originally belonged to my grandmother...I knew this had to come home with me...and I didn't want to put it in a closet and only bring it out when I had flowers to put in it...I had to put it in my sewing room where I'd see it every time I sit at my machine, or just go in my sewing room to sit in my chair and stitch or just to sit.  So many memories in that one glass vase...Mom, Dad, and my grandmother...now it won't have flowers in it because I don't want water by my machine, but it will hold all my little dog ears from half square triangles and flying geese...makes me very happy.

That's it for my little corner of the world...hope you have a great weekend!
Posted by Carol at 5:59 PM 24 comments:

and I think I'm in a fog...most evenings as I reflect on the day, I'm not sure where the day went...it truly is a blur.  Josh, Katie and the kids came in a week ago Thursday for Mom to meet her new great grandson, Peyton Wells Crago, for the first time.  The doctor said they could travel by car with him at 2 weeks and bless his heart he turned 2 weeks that very day.  They were here over the weekend and headed back home on Monday.  It was truly the most wonderful 3 days...we just couldn't have asked for anything more.  Mom spent many hours holding Peyton, and when she wasn't holding him she was playing Matchbox cars on the coffee table with Hampton or coloring and reading with Camden...Hampton also tried to teach her how to play Angry Birds on dad's IPad...we laughed a lot and shed some tears...it was the BEST family time.  We took a few minutes to take a new Four Generations picture with the addition of Peyton. 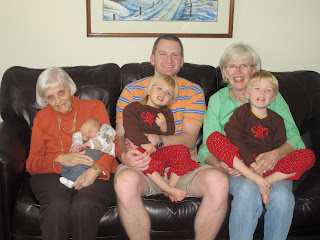 A picture that we will all treasure.

Not much sewing going on here...most of my time is spent with Mom, or taking care of stuff for her.  We had a hematologist appt on Tuesday and her blood count was down so he sent her for another transfusion.  So all day Wednesday was spent at the hospital...then on Thursday she decided that she would not have anymore transfusions.  She's decided to just let this play out...it's so hard on her and as she says "For what?"   When she first got the diagnosis back in October she said all she wanted to do was to be able to see her new great grandson...the kids made that happen, and for that I am forever grateful. She's content and has accomplished what she wanted.  She's not in any pain, is in good spirits and still sharp as a tack...what more can I ask for.  So, don't think she'll last too much longer, and she knows that, and is good with it all...so I'm OK with it too.

I found a bit of time yesterday and got my January project for Christmas Through the Year done...a flannel pillowcase for Camden. 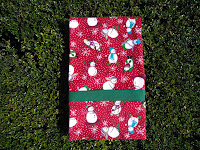 Thanks so much Darlene and Cheryl for doing this...I sure had fun!

I've sure missed all of my Blogland friends and I want you to know that I appreciate all of your notes, good thoughts, prayers and support more than I'll ever be able to express...Thank you my Friends!
Posted by Carol at 4:17 PM 39 comments:

I've given my word some very serious thought these past several weeks...trying to come up with just the right one for my life...and it hit me yesterday, even though I kept trying to push it away and come up with something else...this one just kept calling to me...Decluttering...now spell checker doesn't seem to like it, but that's OK, I like it...and so it goes...2012 is my year for Decluttering.

Now Andy can't quite figure out what I'm going to declutter...I've been through all the drawers and closets in this house...well, except for the sewing room...that will come later when I have more time to dedicate to that job...but I'm not just going to declutter stuff in my house and in the garage, but I'm going to declutter stuff that I've been carrying around in my heart and mind for way too many years...there are people who have wronged me or my family at various times of my life and I've said that I've forgiven, but unfortunately I haven't forgotten. I need to get rid of this old stuff...I know I won't ever be friends with these people again, and that's OK, I just have to get rid of the baggage...declutter.  There are things that people have told me over my 60 years, not smart enough, not pretty enough, not as good a friend as I should have been, not thin enough, hair not quite right, sure can't sing...I could go on and on...I started working on these things over this past summer, I've come many miles but I still have a ways to go...It's a journey and I'm ready to be rid of it...declutter.

So that's my word...I can't tell you how liberating it was to get rid of the stuff I've gotten rid of so far...why should I hang on to this stuff when there are people that can really, really use it.

I really didn't set out to have this post be quite so long...sorry...if you're still with me, Thanks!  I am looking forward to 2012...a new year, a clean slate...but I will continue to look at it one day at a time...I can't worry about yesterday, it's past...no sense worrying about tomorrow...today is the gift I've been given and I plan on doing everything I can to make the best use out of it...no more could ofs or should haves...no regrets...no guilt...no more excess baggage...as my Hampton says..."I'm done with that!"