that I've been on cruise to an exotic country, an African safari, a ski trip to Colorado...something exciting...but I can't...I've been right here at home...not a thing out of the ordinary going on.  Happy news this morning...we had Howie at the vet on Monday morning, she wanted to run a senior panel (bloodwork) on him, since he's 10 1/2...they just called a few minutes and my boy is PERFECT!  We are so excited...we did find out on Monday when we were there that he's gained 5 pounds in 4 short months...oh dear...guess we've been spoiling him just a bit too much...or the vet tech that weighed him in January made a mistake...that's Howie's story and he's sticking to it.

I have been sewing and having fun...Temecula Quilt Company's Monthly Mini for April... 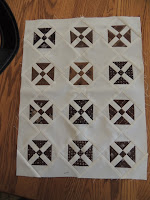 these were some teeny blocks...so much fun!  Sure makes me pay attention to my piecing.

Got my Hat Trick 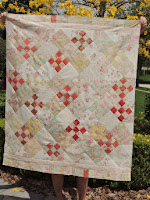 done for Another Year of Schnibbles: Vintage Schnibbles...I added some blocks to it to make it a bit bigger...it's made from Paris Flea Market and will be going to a sweet new baby girl in October.  Dear, dear friends of Josh and Katie will be having their first baby in October...she just had to have a quilt.  Sorry for the not so good picture...we were getting ready to have a storm and I had to get the pic taken so I could get it off to my quilter...I'll take a better picture of it after the binding is on.

I've been lusting after this quilt every time I see these blocks posted on blogs...so I got the pattern and made my first block... 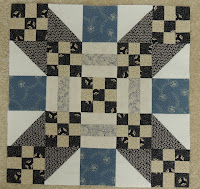 Crossroads by Geoff's Mom Pattern Co....it's a big block...15"finished...I'm using stash and having a blast.  I'll be doing a block a month.

We've been watching this water bird all week... 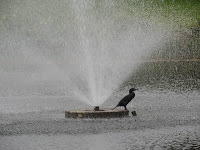 it's an anhinga...we've had these in the pond for all the years we've lived here...they swim around, they dive under water on one side of the pond and come up on the other side of the pond...this guy has discovered that if he stands on the fountain he can stay nice and cool and wet...everyone on our circle is talking about this funny fella.

And if you're not fond of snakes, close your eyes and scroll down for a minute...my neighbor was walking by out front with her labradoodle puppy and she came upon this brightly colored guy... 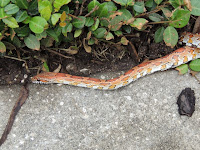 she said she backed up and came across the grass to my front door...I went out and took a look...he's just a corn snake...I gave him a push to send him on his way...sadly he didn't move...something had gotten him...we had to have a burial.

Have a wonderful day...do something today that makes you really happy!
Posted by Carol at 12:33 PM 28 comments:

It's a Yellow Explosion

My wonderful tree out front absolutely exploded with color on Friday... 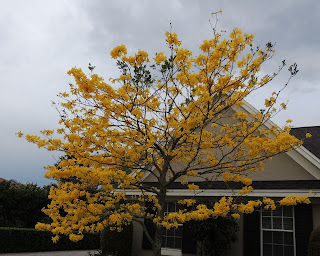 I could tell on Thursday it was ready to pop and when I went outside on Friday there it was it all it's glory.  Well, yesterday we had a crazy storm...we were under tornado watches for hours and a warning for a bit...it rained like crazy, it thundered up a storm all while the sun was shining...go figure.  We had several more showers late into the night and when Howie and I went out this morning it had rained yellow flowers all over the front. 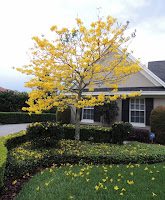 Oh my word...well, Andy's been gone since Friday, he went up to celebrate his birthday with Camden, she was having her friend birthday party on Saturday and she wanted her Grandy to come.  He had a blast...Friday when he got in, Katie and Peyton went to an appointment so he and his girl played...and I mean played...4 rounds of Hungry, Hungry Hippos...Princess sticker book, she cooked a meal for him in her little kitchen while he sat at the little table, she played the piano and he danced...all of that in a little over an hour.  Then Hampton got home from school and they went for a bike ride...oh dear, he's not used to all that activity...LOL!  Saturday they were at the soccer field at 8:30 for Hampton's game and at 1:30 they were at the park setting up for Camden's party...they got back home a little after 5...I didn't get the full run down on Sunday yet but I'm sure it was another fun filled day...now why did I go through all of that, let me go back and read what I was starting to say...Oh, because Andy was gone and coming home today, after his busy weekend, I went out and cleaned up all of the flowers...half hour and a full trash can later there wasn't a single flower on the ground or in the bushes...I was just out a minute ago and there are about 200 on the ground again....hmmmm, I'm heading upstairs to sew!  Have a fun afternoon everyone, I'm going to finish my enlarged Hat Trick...I'll be back with a picture soon!
Posted by Carol at 11:49 AM 14 comments:

A big Thank You! to Darlene and Kathy for challenging us to do the quilts from Tara Lyn Darr's book Simply Charming...I had so much fun today...cut it and sewed it and now it's ready for the quilter...my sweet quilter is going to cross hatch it for me on her regular sewing machine because it's little and I don't machine quilt even a little bit...I'm so excited...she spoils me so...thank you!  Thank you!  This is Teresa's Treasure but I hopped out of the box and used a Christmas charm pack (Blitzen) instead of the pink and brown that was in the book...I have a spot that needed a little Christmas quilt and this sure fit the bill. 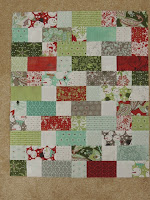 Before I got started on this today I spent a little time cleaning up my messy sewing room and as I was putting stuff away I found some things that need a new home...check out my other blog, Brown Quilts and MORE,  if you're interested in some oldies.  Have fun!  UPDATE:  Everything sold...I'll have to do some more cleaning.  Thank you everyone!

My Fat Quarter Shop Designer BOM block was in today's mail...that's what I'll be doing this evening...I'll be in the sewing room if you need me!
Posted by Carol at 5:16 PM 10 comments:

I was thinking this morning as Howie and I were out walking...some might think this blogpost and several before this one are just pure chaos...not me, I like to think of it as organized chaos.  I have never been one to cut a project and finish it until the end...when I made clothes I always had several things going at the same time...same with cross stitch...macrame (OMG who remembers macrame?) I always had 4 or five things hanging down in various stages of doneness...that was the year everyone got a hanging plant in a macrame hanger for Christmas...oh boy...LOL!  Well when I started quilting back in 1976, a friend was teaching me templates and hand piecing...that wasn't quite fast enough for me...I loved doing all of that with her, and will be forever grateful to her, I learned the basics and I learned them right, she was a real task master, but I needed instant gratification and that was taking way to long...so I took some of the blocks that she had taught me, log cabin and churn dash and started other projects with my very old Kenmore sewing machine and those blocks...I was hooked...to this day I can't work on just one project at a time...bet you didn't know that about me...LOL!LOL!  And now that Yvette has me making lists I am organized and efficient...getting it done and having FUN!  I'm loving it and CELEBRATING every day!

Here's what I've been up to since my last post...Camden has her 4th birthday coming up...how did that happen...and she wanted some new pillowcases...so we all know that Mamie must make that wish come true...so a trip to Joann's and a little bit of time...2 pillowcases for Miss Camden...

Then I've been lusting after Yvette's blocks for her Four General's BOM...I finally caved and went and signed up...my initial thought was just to get the pattern and use my stash...but then I decided it would be so easy to just have those little packets arrive all ready to go...a couple of days passed and I got a phone call...someone had signed up for the last spot just a few minutes before I did...I was not going to get those little packets in the mail...so I got the pattern and went to my stash...here is my first set of blocks... 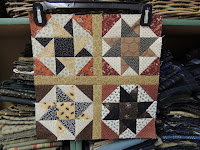 I had a blast making these and I found some fabrics I hadn't seen in a while...so this all ended up very happily.

I also have been loving Lori's Barns...but decided I didn't want a whole quilt but that 6 of them would be wonderful on the back of my Farmer's Wife/Rancher's Daughter/Carol's Choice quilt (I am going to have to come up with a better name)...so here is my first barn... 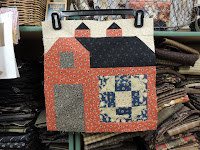 TALK ABOUT FUN!  Thanks Lori!
I have one last thing to share with you today...in my quest to be more efficient, I decided that in the afternoon when I'm done sewing upstairs, that I will clean up a bit and set out the following days sewing on my cutting table...here's what I have today... 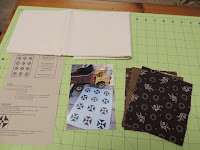 the Monthly Mini from Temecula Quilt Company...I did this fun program with them when they first offered it but was falling way behind and gave it up...then this year I've seen such wonderful little projects I decided I just couldn't miss out...so this is what I'm working on today.  I've found I waste much less time when I start my sewing time because I don't have to think about a thing..it's right there ready for me...I'm off to go cut...Have a wonderful Wednesday!
Posted by Carol at 10:17 AM 22 comments: