I was a Busy Girl Today

Today being Wednesday, it was my normal, regular day off...so I guess I really just ran around and did stuff like I normally would have...walked the dogs, I have to take them separately until Zack gets better, he can only go for a very short walk outside...went to Target, Bed, Bath and Beyond,did some cleaning in the kitchen, cleaned out the pantry and then went upstairs to tackle the book shelf. I had a smaller shelf that just had 3 shelves and that just wasn't working, so while at Target I got another shelf with more shelves.
Before...I should have taken the picture really before I took them off the shelves

After...it looks so much better...

I have made some real headway in the sewing room and stash room...I think I'll get to do some really serious sewing real soon...maybe tomorrow.

I'm going to have to get used to this time thing...if I keep thinking I have to get everything done in one day, I'll run out of projects way too quickly...Never happen :)

As of 2:45 Eastern Daylight time it is official...I am retired!

I'm not sure I ever worked so hard, or maybe it's just because I'm older than I was when I started the shop...WOW!
The last gal came today and picked up her furniture...then at 2:35 the property manager came to walk through. She kept saying...It's so clean...I wanted to say "Well yeah" but I thought I better be on good behavior. After chatting for a few minutes I handed her the keys, and the check and off I went! One very happy girl. I loved the shop for all those years and now I really think I'm going to love my new life.
I came home and even sewed a bit...nothing to show, but I think I'll have something tomorrow!
Thanks to all of you for stopping by and sending your good wishes...now you know you're going to hear from me lots more often...hope you're ready for this.
Have a wonderful evening...

On To The Next Chapter

The very last customer came into the shop at 4:25 on Wednesday afternoon...Kathy had been the president of the local guild a few years ago and has always supported the shop. It was wonderful that she was the last customer...rather than a random person that I'd never seen just coming for that last bargain.
I got the most wonderful surprise on Wednesday late morning...the phone rang and a voice on the other end of the phone started talking...she asked how everything was going, was I excited, what was I going to do first after the shop closed and several other fun questions...I just couldn't figure out who it was...well she said "You don't know who this is, do you" I said "No, I really don't"...she said it's "Darlene, from Arizona" OMG! I squealed and screamed, poor Darlene probably doesn't have her hearing back in that ear yet. What a sweetheart...she said she just had to call on my last day to wish me all the best. I can't even begin to tell you how that made me feel. I think I smiled all the rest of the day.
When Andy and I were having breakfast on Wednesday, I said "I know that we made the right decision to close the shop, because I don't have a single regret." Well that was confirmed later in the day. A lady I hadn't seen for a long time came in early afternoon. She said she had to come in before I closed to tell me that she was so happy for me, that I had decided to retire. Then she started to cry, she began to tell me the story of her husband who had retired about 9 months ago and had just been diagnosed with Alzheimer's recently. With medication he has about 3 years that he'll be "OK" say the doctor's then after that they will be pretty much staying home. She said they are cramming all their years of retirement into the next several years. He's only 63. So she said she was so happy that we decided to do what we are doing and retire early so we can enjoy each other and do what we want to do. WOW! By then we were both crying, she apologized for dumping on me and I thanked her over and over for sharing her story with me...One more confirmation that we are doing the right thing.
Then at the very end of the day, 2 of my very favorite gals called, one at about 4:50 telling me she had a bus load of ladies that wanted to come by...we laughed and laughed...she wanted to wish me well one more time...she's not going to be rid of me because I'm going to her house to sew when the dust settles. And then the final call was from the president of the other large guild in the area, and always a supporter of the shop, to say that she was on her way and would I wait for her...then she laughed and said she was just teasing, she was really home and wanted to say "ENJOY" one more time.
I am such a lucky girl...I have such wonderful people in my life. Now on to the next wonderful chapter of my life.
Posted by Carol at 6:50 AM 18 comments:

It's early Monday morning and I'm looking back at last week now that it's past. WHEW! All I know is that it flew by...We started the 40% off everything in the shop so needless to say it was very busy. The shop is getting very sparse...also on Wednesday my Zack had to have knee surgery...he blew out his knee so just like a human they fixed it. Andy's been playing nurse for him...medicine, ice packs, heating pads and thankfully he's doing very well. Next Monday the stitiches come out and then he just has to heal. He looks pitiful...all shaved in 3 places...his hind quarter, a spot above his tail where they gave him an epidural so they didn't have to use so much anisthesia, and a place on his front leg where they had the IV in. He is being a very good patient and his brother Howie is also being very good. He sits right next to him making sure he's OK.

id='BLOGGER_PHOTO_ID_' style='clear:both;float:left; margin:0px 10px 10px 0;'>
I got the nicest surprise in the mail on Wednesday afternoon...Wendy, over at Snippets of a Quilter, saw my Paducah Nine Patches and send me these to add to my quilt. I was so thrilled. This is going to be the BEST quilt! There is not a group of people out in the world better than quilters.

Saturday one of my customers/friends came in the shop with this wonderful sticker for me...it says it all

My life is good...good health, good friends, a wonderful husband, a new chapter of my life...it couldn't be any better!

Off to get ready for the last 3 days at the shop...Have a wonderful day everyone!

Can you tell I need sleep?

I wrote an entry last night to tell you about my fun mail from Nicole...put up the pictures or so I thought and there were none...so I deleted...but it showed up on Bloglines...so anyone who read it there last night probably thinks I'm nuts because there were no pictures...So this morning I did the pictures again and posted, forgetting that I had deleted my post, so you don't know about my little girl...oh I must sleep.
Sharon, at redgeraniumcottage.typepad.com, has been telling me for a while that I need one of these little girls. So off I went to Nicole's website and found this little one...she has little animals on her dress and so she had to come live with me. She's in my sewing room watching everything I do. She just makes me smile.
Posted by Carol at 7:58 AM 4 comments:

Here are the Pictures

I have no clue, but Picassa and Blogger just weren't playing nice last night so I tried again this morning...Hopefully when I hit the publish button the pictures will really be there...here's my little girl wrapped in her tissue...with her tiny little voice..."Let me out! 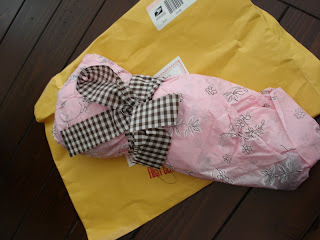 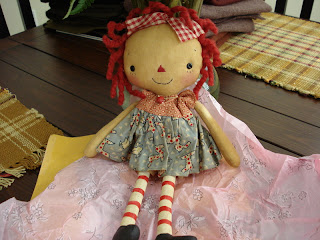 Nan over at Quilting in Doxie Land! YIPPEE! You are the winner of the drawing for my first year Bloggiversary!
I'm sorry I didn't get to do this yesterday like I had planned. Yesterday was the first day of the BIG sale at the shop...by the time I got home I was just too pooped to pop...so I thought I'd wait until this morning. I was afraid to put scissors in my hand and cut apart all the entries. Thanks to all of you for your wonderful wishes on both my bloggiversary and my retirement. I am looking forward to spending time with Andy, traveling with him, sewing and of course blogging. Someone wrote and asked if I was going to stop blogging now that I was going to be retired...NO! Quite the opposite I hope. I hope to blog more...have more pictures to post, since I'll have more time to sew and blog and take pictures.
I have met so many wonderful gals in my year of blogging I'm looking forward to building those friendships and meeting more wonderful gals.
I'm going to sit in my floating chair in the pool for a while and see if I can muster enough energy to do something productive today...if not I'll just store the energy for the rest of the week. Have a great Sunday!
Posted by Carol at 11:55 AM 7 comments: