Howie and I...stay up until midnight, sleep until 7 (we're usually in bed by 9:30/10 and are up by 5/5:30), don't make the bed, eat whenever and whatever we want, including Cheezits for lunch...we watch every program on the DVR  (the final episode of Private Practice, 2 episodes of Grey's Anatomy, 2 episodes of the Fabulous Beekman Boys, and 2 episodes of the Bachelor)...not only that but we watch 2 whole seasons of Downton Abbey 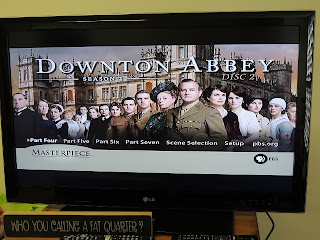 and then find season 3 online and watch the first 3 episodes so we're caught up with what's coming on tonight.  WOW! sounds like all we did was sit and watch TV...well we also moved the furniture around in the sewing room and we SEWED!

It has been a really crazy couple of weeks, which would explain my absence from Blogland.  Andy went up to Pennsylvania last Sunday and came home Tuesday...one of his very best college friends was asked by their college to come and speak for Martin Luther King's birthday/Inauguration event...so Andy decided he would go up.  He flew into Pittsburgh and then rented a car to drive to his college town, Greenville...it's about an hour or so and mostly interstate so he said it wasn't too bad.  Yes, be was born and raised in PA and learned to drive there but he's been a Florida boy since 1971 so his snow and ice driving skills are long gone.  Well that was supposed to be it for his travel north for the winter, except that his very best friend since they were little, little boys, mother passed away on Wednesday...very unexpected...she was 82, sharp as a tack, played golf all summer long, volunteered at the local hospital and Hospice...it was quite a shock.  So Thursday we were making plane reservations, car rental reservations and getting him packed to go.  I was beyond nervous about this trip, a good bit of snow and ice coming in on Friday, he got in around noon and drove to his hometown, Clearfield (about 2 hours) through the snow...he started to tell me and I said I needed to just wait until he got home to hear it.  He gets home early this evening and I will be very thankful to hear his car in the garage.  That should be it for his travels for a while.

I fell in love with Darlene's challenge to make the little quilts in Tara Darr's book...Simply Charming...I just couldn't wait until February to make the first one...so I jumped right in and did Grannie's Scrapbox... 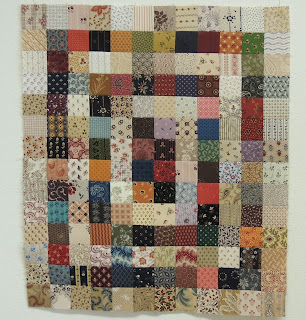 it was so darn much fun, quick and easy, just what a girl needed while watching all those TV shows.

I am so totally hooked on Downton Abbey...I have no idea why I was so late getting to this wonderful show, but I'll be caught up this afternoon and ready for tonight's episode.  LOVE it!

Hope you all have a fantastic Sunday!  I'm working on my Cotton Club quilt, a BOM from last year (I think)...hopefully I'll get it all put together and I can make another check mark on my To Do list.
Posted by Carol at 12:05 PM 34 comments:

Hope everyone is having a wonderful Saturday...hope you're finding time to do what you love...time to CELEBRATE!

We've had a busy day, but we've been having fun...went for a walk this morning and while we were walking Andy decided that we needed to clean the front porch.  So as soon as we got home, out came the hose, buckets, Spic and Span, mop and rags and to work we went...now the fact that it's crazy warm here, everything thinks it's spring it was really very pleasant.  He cleaned the porch and the railings and I did the rocking chairs and little table...well, you know how one thing leads to another.  The black rocking chairs were looking a bit worn so out came the spray paint...now we have a clean porch and new looking chairs...makes me happy!

When we finished, took Howie for a walk around the neighborhood, I ran upstairs just as fast as I could before my man got anymore ideas.  I needed to sew!  Darlene and I were chatting the other day and I told her how much I loved her Round and Round...she said she had more charms and would be happy to send them to me...so Thursday they arrived..."Cherry Baby" charms...I never got any of that line and it's just perfect for my Camden Girl...so yesterday I cut for the large quilt and the small quilt...she'll get the big quilt and her Bitty Baby will get the little quilt.  So today was sewing time...got the little one done. 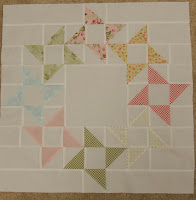 This pattern is so much fun...when I first looked at the pattern I couldn't for the life of me figure out how it was going together...Camille is a very clever girl...this block is so much fun to put together, you must lay it out like a puzzle and don't flip anything (guess how I know that?)...goes together perfectly.  I sewed a bunch more of the half square triangles (she has a trick for those too and it's really fun) so I'm ready to sew more blocks together.  Tomorrow...

Kathie, from Inspired by Antique Quilts, asked to see more of this quilt... 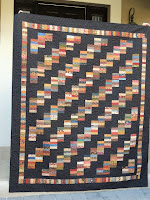 it was on the back of the my chair in the Prince Howie picture...the pattern is Moose on the Loose by Carrie Nelson and can be found on the left sidebar of her blog.  This is one of my favorite quilts of all times...it's a great design, wonderful pattern, would look great in any fabric...I just love it.  Thank you Mr. Brown quilts for being my faithful Quilt Holder, lots of good sports on today but he was happy to come to my assistance.  He never lets me down!

Off to watch some football!  Have a great evening!
Posted by Carol at 4:59 PM 22 comments: 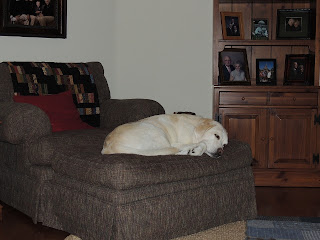 Now Howie says I really do need to explain...the day before the kids left we did a little furniture rearranging.  This chair and ottoman are my absolute favorites...this is the comfiest chair...I call it my nest...it's a chair and a half so I can curl up with my quilt, watch TV, sleep, stitch whatever I want...well, when we moved to this house 8 years ago we decided that we wanted a loveseat and couch, along with Andy's chair for the family/living room, that's what would fit best and we thought we'd get more seating...so my favorite chair went up to my sewing room.  We had another loveseat that we put in Andy's office...well my chair didn't get a lot of use up in my sewing room and I always missed it.  So while we had Josh here I talked the guys into moving furniture for me...my chair and ottoman came down...the leather loveseat went to Andy's office and the older denim loveseat went up to the sewing room.  I'm thrilled and as you can see, so is Howie.  He and Zack used to sit on this ottoman together when they were little, then when they got bigger only Zack got up there, it was his favorite spot...now it's Howie's favorite spot. 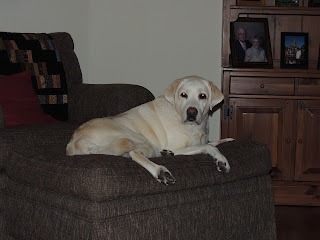 I've been cleaning, sorting, and reorganizing in my sewing room...I am posting some stuff over at Brown Quilts and more and there will be more to come as soon as I sort some more!  Good prices...maybe there's something that you've been looking for.
Posted by Carol at 11:56 AM 18 comments:

Can't Think Of A Better Way...

...to bring in the New Year than with my favorite people.  We tossed the football... 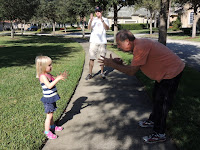 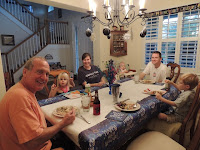 (the kids loved the New Year's decorations in the dining room)...we laughed... 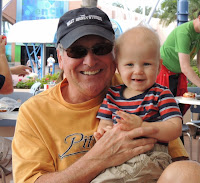 we spent time with Howie... 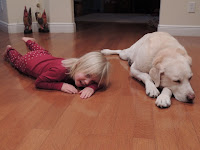 we met Disney characters and loved them all... 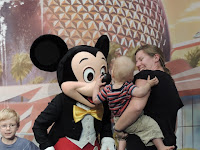 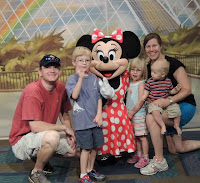 we helped our little brother get ready for the day 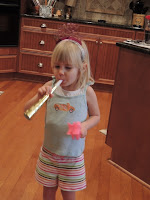 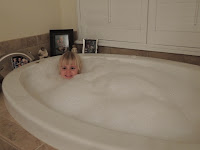 and Mamie had a blast but she was pooped... 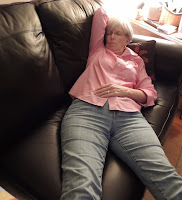 This truly was the BEST New Year's...we had so much fun...the perfect way to bring in the New Year!  We are so blessed and so grateful!
Posted by Carol at 5:33 PM 24 comments: